Genetic Engineering: a Risk or a Benefit?

Genetic engineering has been a controversial issue for several years, for both health and ethical purposes. It involves the alteration of a gene using technology, usually for health, agricultural, and economic purposes. Throughout history, animal breeders have been selectively breeding their animals for certain desirable traits. However, this technique took decades in order to achieve these certain traits. Now, with modern technology, certain traits can be achieved instantaneously. Even though genetic engineering is used for a good cause, it might not always have the intended outcome. 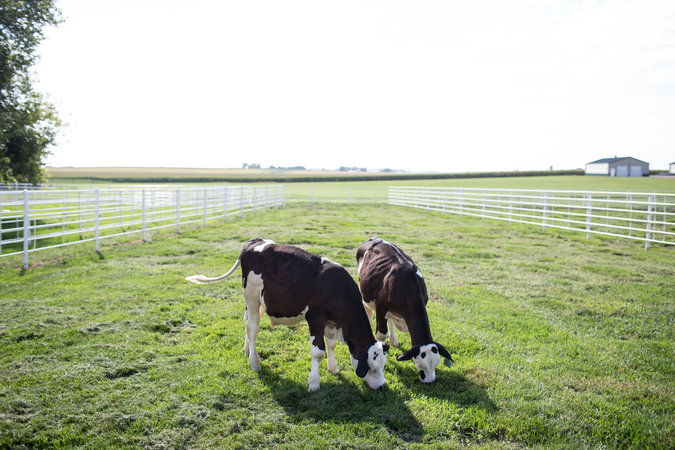 As shown in the picture above, the two calves had their genes altered when they were just single cells in a petri dish, so that they do not grow horns throughout their lifetime. This was an alternative to dehorning; a painful process performed by farmers in which they burn off the horn-buds and stop the growth of horns to prevent injuries. Some examples of Genetically Modified Organisms (GMOs) with more nutritious values are the strain of “golden” rice with a lot of beta-carotene (an antioxidant good for the eyes and skin), soybeans whose fats are more heart-tolerant and better for cooking, and meat with higher amounts of omega-3-fatty acids, which can help prevent heart disease, stroke, and cancer. Recently, researchers have reported that they edited Malaria-carrying mosquitoes so that they no longer carry the parasite. These are just a few examples of genetic engineering for good causes.

On the other hand, there are many questions raised about genetic engineering. One of the most common questions asked is if food made from GMOs is “good for you.” Many scientists from the American Association for the Advancement of Science, however, say that GMOs are safe to eat. Another concern is the use of animal viruses in genetic engineering, which people worry that this could infect people or other animals. Because of this, the FDA (Food and Drug Administration) takes a different approach with GMO products in order to prevent spread of disease.


I personally have mixed views on genetic engineering. I think that it can be very useful to the pharmaceutical industry and other biomedical fields, in which it could be used to help find new cures. However, a major concern I have about it is the impact it has on the animals being edited, like the increase in growth rate and early maturation, which could cause stress on the animals.  I also believe that if scientists are not careful, genetic engineering may have a disastrous outcome, even to the point where the GMOs are beyond control.

http://www.webmd.com/food-recipes/features/truth-about-gmos#1
Posted by Unknown at 8:57 PM