The Importance of Beetles with Three Eyes to Genetics

Beetles with three eyes have the potential to further our current knowledge on genetic development and have in recent studies. Recently in Eurekalert, a press release identified that new traits had evolved through specific genes. The researchers turned off the orthodenticle genes specifically, and ended up with some fascinating results. The beetles head structure had evolved and there was either complete loss of, or the shrinkage of, their horns. In addition to this, the beetles had developed compound eyes in the middle of their heads. The same type of changes were made with another species of beetles and they did not yield the same results. 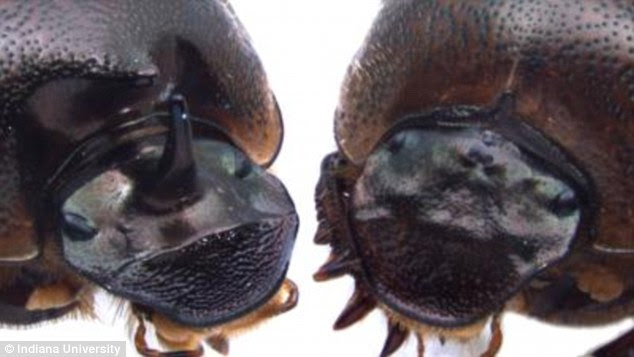 This was amazing to researches because now they could turn off the development of one major region of the head, and turn on the development of another. The researchers feel that orthodenticle genes have developed a new function which is now to instruct the development of horn and head configuration. They figured this out by mapping the regions of larval heads that would later make up the fully-matured, adult heads. They turned genes on and off to distinguish the multiple roles they have in head development. Overall, the study of beetles in relation to genetics remains to be an exciting and interesting area of study.

I find this to be incredibly compelling because if we have the potential to remove genes from a certain area and enhance or turn on the ability of others within beetles, then we probably have the capability of doing the same in humans. This could mean that we might be able to eliminate undesirable traits, or illnesses in the future and potentially offset a more positively inclined gene in return.
Posted by Unknown at 11:19 PM