Morning Person or Night Owl: It's In the Genes 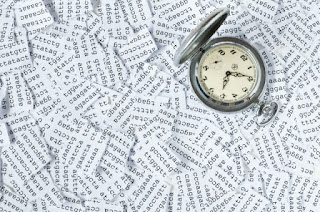 Have you ever wondered why some people spring up early in the morning while others drag their feet like zombies and need numerous pots of coffee to be prepared for the day. Or the complete opposite where people can stay up until the mere hours of the night while others struggle to catch the 11 o' clock news? Well, with the work from researchers at the University of Leicester used a study done on fruit flies to identify that these characteristics in humans and other organisms is genetically linked.

They conducted their research by studying the chronotype in fruit flies and took note of when they emerged from their pupal case. They discovered that most emerged during the morning hours while a smaller some emerged later in the day. The flies that were late to emerge were then bred together and what was found is that researchers were able to breed flies with the same chronotype as their parents meaning that early and late rising is genetic.

A genetic analysis was ran 24 hours prior to the emergence of the flies and what was found is that it was not just the same genes that were active during at different time in both types of flies but also that the genes were characteristically different themselves.  Researchers explained that different gene expression in the early risers and night owls is due to genetic variations in their DNA sequence. Meaning that the cause of some flies or humans arising later than others is not due to a delay in the genetic clock of individuals but is actually completely different in every aspect.

I found this article very interesting because while reading the article I came across the reason this research is being done and I found that it is going to be most beneficial for us as human beings to better understand our biological clock. We are all required to work "normal" shifts such as a 9 to 5 work day or school day and it is becoming more evident that everyone has a peak in their day when their performance is at its highest and that is what should be the basis of people's schedules.
Posted by Hailee Anzisi at 5:20 PM