Endometrial cancer is a common disease that affects approximately 200,000 women in the United States every year. This disease occurs when cells in the inner lining of the uterus begin to divide uncontrollably. This most often occurs after women reach the age of 55 and is currently treatable through removal of the uterus, radiation therapy, and hormone therapy. Currently, the survival rate for a woman diagnosed with this disease in stage 3A is 58% after five years, but it is common to live longer. Researchers have discovered 5 gene regions that help with determining the risk of a woman developing endometrial cancer. 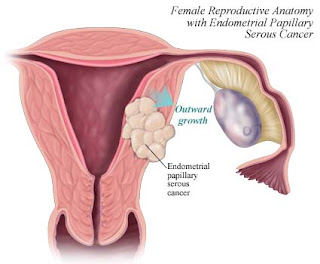 Determining the genetic markers that tell of an increased risk of developing this cancer will help many women in the future. Since Endometrial cancer is the number one cancer that affects women, it is imperative that we find even more gene regions that may help determine the risks of developing endometrial cancer. Finding more gene regions that are identified with this cancer may enable scientists to create the same standards when determining risk of breast cancer, in that case the BRCA gene. Much like how women sometimes undergo mastectomies to prevent the development of breast cancer, women with a high risk of endometrial cancer can undergo hysterectomies in order to help prevent this cancer. Not only have these new regions been associated with endometrial cancer, but ovarian and prostate cancer as well. So further research may enable scientists to create better tests that utilize genetic data to treat disease. This new data may also help in creating drugs and technology that specifically targets these specific regions. These are great leaps forward because in the past scientists may have had the technology, but they did not know specifically where in the genome these markers were located. So now the issue lies in actually targeting these errors that occur within the human genome. Scientists have taken biopsies of endometrial tumors and have obtained the genetic code from them, and scientists hope that this will someday be used to determine the most affective pharmacological and technological treatments.
Posted by Erik Nyman at 5:30 PM