ZIKA Virus: Add it to the List of STDs 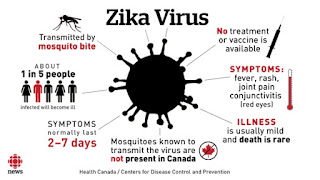 A study recently done by researchers at Paris Public Hospitals, Aix-Marseille University, and the National Reference Centre for Arboviruses confirms that the ZIKA virus can in fact be transmitted sexually. Based off of their research it is now known that there is 100% genetic correlation between the form of the virus that was present in a man who contracted it in Brazil was also present in a woman who had never traveled to Brazil but had sexual intercourse with the man upon his arrival.

What is known about the ZIKA virus is that it is transmitted to humans by Aedes mosquitoes and that it has mild symptoms to adults that are infected by has severe complications to infants with mothers that are infected while the child is in utero. These results have been acquired due to testing a man who contracted the virus by taking urine, saliva, and blood samples and comparing them to a sick woman who had had sex with him but had not traveled to the epidemic area. Due to the fact that the virus was detected in the urine and saliva of the woman but absent in the blood and saliva of the man allowed researchers to search for other causes of transmission.

The man's semen was then tested and high viral levels were found (approx. 300 million copies/ml). The virus from both people was then individually sequenced. The saliva from the woman and then semen from the man and after examination it showed 100% correlation between the two genetic sequences. From this it can be confirmed that the ZIKA virus can in fact be sexually transmitted from person to person.

I find this article very interested because it is very common for someone to travel over seas in an "epidemic area" that is associated with numerous dangerous diseases. With the growing knowledge about these new diseases it is important to know what can be contracted sexually. All of us as human beings have a set list of STDs in our head and tend to only associate those common and well understood diseases with having unprotected sex. With the ZIKA virus becoming more understood and the light being shown on the fact that it can be transmitted sexually, it can open people's eyes to the fact that there is always a risk of transmitting unwanted and dangerous diseases through unprotected sex.