In the year 2010 what had thought to have been a nonsignificant fossil was found and after DNA testing was conducted, what was discovered was very significant. DNA testing exhibited the existence of a new species that no one had ever seen before, the Denisovans. As if uncovering an unknown species was not exciting enough, the next surprise was the fact that some humans in today's day and age share Denisovan DNA. This means that modern day humans and Denisovans mated  and created children.

Sriram Sankararaman, a population geneticist at the University of California and David Reich at Harvard University study Denisovans through the genes left behind in present day humans since there is little to no fossil evidence for the species. These two geneticists sorted through 257 genomes of present-day people from 120 non-African populations around the world and found that among humans living today, people from Papua New Guinea, Australia, some parts of Oceania, and also South Asian countries have the most Denisovan ancestry which is about 3% to 6% of their genomes. 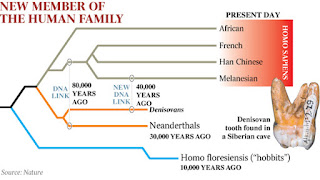 Reich theorizes that the explanation for why modern day humans have Denisovan genes is due to mating only once. While Homo sapiens were making their way over to Australia and Papua New Guinea. Following the mating between Denisovans and modern humans, their offspring then mated with other modern humans who had never came in contact with Denisovans and so on and so forth different populations ended up with different proportions of the Denisovan genes. Reich explains a different theory as being that people in present day India are evidence that a mix of ancient South Asians and local Denisovans occurred and that the people found in Oceania with Denisovan lineage are from a completely separate mating occurrence with Denisovans.

The most intriguing part of uncovering this new species that mated with humans is that there were both benefits and consequences to this act of "free love". Evidence suggests that Denisovan genes that were inherited by Himalayan populations exhibited lower levels of hemoglobin levels in their blood which allowed them to be more successful at higher altitude. However a downside to Denisovan and modern humans mating is that there has been no trace of Denisovan ancestry found on the X chromosome or on genes that express themselves in the tissue of the test meaning that when these two species mated, their offspring are infertile. Therefore the mating between Denisovans and Homo sapiens leads to a genetic halt. 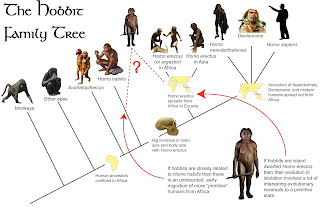 I find it very interesting that there is now another source information to paint a picture of where present day humans originated from. It makes me question whether or not somewhere along the line in my family, mating occurred with Denisovans. The likelihood that my family genome contains Denisovan DNA is very rare though since we do not have any South Asian or Australian descent (that I know of). I wish there was more information given about the infertility of Denisovan and Homo sapien offspring because I am confused as to how there are traces of Denisovan DNA in modern humans if the offspring were unable to reproduce and pass along their genes.