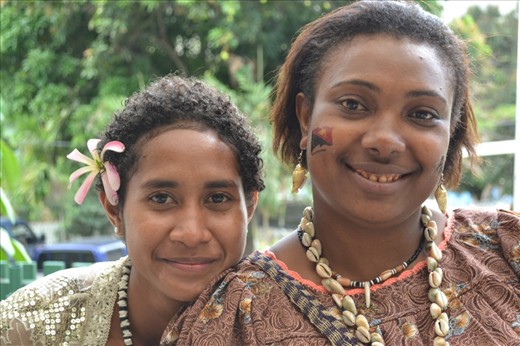 New research has shown that a group of Pacific Islanders, known as Melanesians, have acquired genes from two different species of ancient humans. The study, led by geneticist Benjamin Vernot and colleagues at the University of Washington, tested DNA from 35 Melanesians, focusing on DNA from 27 unrelated people within the group. They also sampled DNA from about 1,500 different modern-day people from all over the world. The researchers compared all of the DNA samples to the DNA of two stone age hominid species, the Neanderthals and Denisovans, that they obtained from fossils. The results showed that Melanesians inherit 1.5 to 4 percent of their DNA from Neanderthals and 1.9 to 3.4 percent from Denisovans. Some of the inherited genes include ones that affect a hormone that raises blood sugar levels and the breakdown of fats, and genes that affect metabolism and the immune system.

These findings can provide much information about our early hominid ancestors. Researchers are still not sure how Denisovans evolved, but earlier studies suspect that they once lived in Southeast Asia and that is where Melanesians ancestors once mated with them during one period. Vernot believes that early humans and Neanderthals have mated during at least three periods, and estimated this by comparing the two hominid species' DNA sequences with other people all over the world.

I believe that this research can help scientists unlock more secrets of the ancient world and it can possibly be used to help better modern-day mankind. Maybe we could find out what led to the extinction of these species and use this information to make sure that the same doesn't happen to us. I also think it would be truly interesting to know more about our "relatives" because much of their lives is a mystery to us and this is just one of the many pieces to the puzzle.
Posted by Nicole Fandozzi at 6:44 PM