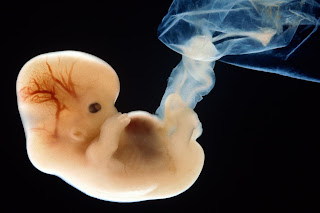 U.K. scientists are given permission to genetically modify human embryos. Scientists will now be able to alter the DNA of embryos, for research purposes only. This makes it illegal to use these genetically modified embryos and implant them in a woman. The entire purpose of this research is to better understand the earliest stages of embryo development.

The embryos that are being used are excess embryos donated by couples who have had "in vitro fertilization treatment." IVF is the process of combining egg and sperm in a laboratory dish and then transferring the embryo to the uterus. Scientists are concentrating on the first 7 days of the fertilized egg, in which one cell becomes 250 cells. Although there are many benefits of this research, people are afraid it may lead to "designer babies." Ronald Green, a professor, thinks that people designing their babies is bound to happen within the next century. However, U.K. would not be the first country to do so. China altered a gene in embryos that causes blood disorders.

Being able to alter the DNA of an embryo for the better, such as China did, is a good thing. However, once people get to choose their child's eye color and intelligence is where it becomes a concern. I believe children should be born they way they are meant to, and they should not be genetically modified unless for major health concerns. Hopefully, this U.K. experiment doesn't come to that. But like Ronald Green, I have a feeling it might in the near future.
Posted by Kajal Patel at 2:58 PM