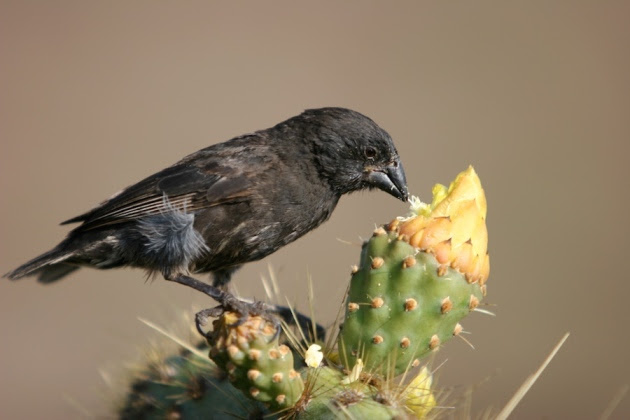 In a new study published this week in Nature, researchers announce that they have just found/tracked the gene responsible for beak size in  finch species inhabiting the Galapagos islands. This research builds upon previous findings from the same researchers a year ago in which they found the gene that controlled beak shape.

By studying the evolution of a finch specie over the course of a drought in 2004-2005, they observed that the specie members with the largest beaks were ineffectively competing with another endemic finch species that had even larger beaks. As a result, they had a die off, leaving behind members that had the smallest beaks within their specie. Comparing the genetics of the finches that died with the ones that lived allowed them to pinpoint the gene that controlled beak size for that specie. This worked because the specimens were the same species, with the same beak, only differing slightly in size.

It's surprising to see just how much we can still learn from studying these finches, despite having known them since 1835 when Sir. Charles Darwin first observed them. I have no doubt that we will continue to learn more about biology by studying the organisms of the Galapagos for generations to come.
Posted by Unknown at 8:56 PM