Melanesians, native to Vanuatu, Fiji, Papua New Guinea, New Caledonia, and the Maluku Islands have some of the oldest DNA found in Humans. About 4 percent of their DNA is Denosovian in origin and approximately 2 percent is of Neanderthal origin. Peoples of this region are thought to have more Denisovan DNA because Denisovans were native to east Asia at this time. Neanderthals on the other hand were located to the west in Europe and did not seem to interact with those in the East. Denisovans were related to humans and are in the genus homo. They became extinct around 40,000 years ago and mated with early modern humans and neanderthals. These discoveries have led scientists to come to the conclusion that no human is of pure bred origin. The large percentage of Denisovan and neanderthal DNA in these peoples suggest that there was more interbreeding breeding than originally thought. 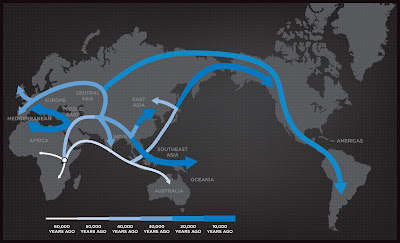 Perhaps the most intriguing information gathered is that modern humans lack “old” DNA in certain parts of our genome. This is especially common for sequences that are involved with “speech and language development.” These attributes of modern humans may have allowed us to excel and survive opposed to denosovians and neanderthals. Researchers believe that the a bulk of the gene flow from the species occurred in three events. Most they say occurred when humans spread out of Africa. In order to determine the DNA of neanderthals and denisovans, scientist analyzed bones from eastern Europe and Eastern Asia. These bone fragments were then compared with humans to find out how common our DNA is with theirs. They also believe that not only DNA was passed on to modern humans, but traits besides language and speech skills. Other things like boosts to our immune systems and disease fighting genes were passed onto modern humans from these ancestors. Human leukocyte antigen also known as HLA genes regulate our immune systems. Approximately 50% of Europeans have the HLA gene from neanderthals and denisovans and up to 95% of HLA genes are contributed to denisovans and neanderthals in Melanesians. The genomes of modern humans contain genes that allow us to fend off epidemics; however neanderthals and denisovans lacks these genes because they were often in too few number for these genes to be necessary or effective. Today, neanderthals may be extinct as a group, but it is thought that up to 40 percent of their DNA is present throughout modern day human populations.