Our closest wormy cousins: About 70% of our genes trace their ancestry back to the acorn worm 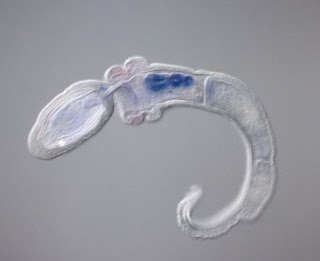 A team from the Okinawa Institute of Science and Technology Graduate University (OIST) has recently sequenced the genomes of two species of acorn worms and have found we humans share more genes with them that we do with many other animals, showing they are our distant cousins. Around 550 million years ago, a variety of animals were born into the world in an event called the Cambrian explosion. This event revealed several new animal body plans and introduced complex animals with specialized huts and behavioral features, including the deuterostome family. Through genome sequencing of several contemporary animals in this family we are capable of going back in time to unveil aspects of the long-lost ancestor of deuterostomes. One of the animals to come from this ancestor is the acorn worm, which is a marine creature that lives on the ocean floor and feeds by filtering a flow of sea water thought tiny slits in their gut region between their mouth and esophagus. These slits are distantly related to the gills of fish, and represent a critical development in evolution. Because acorn fish have such a critical evolutionary development the researchers sequenced two acorn worm species, including Ptychodera flava of Hawaii and the Saccoglossus kowalevskii found in the Atlantic Ocean. The team was interested in identifying ancient gene families that are present in the deuterostome ancestor, and thus compared the genomes of the two worms with the genomes of 32 diverse animals.

The study found that all deuterostomes share 8,600 families of genes, and that approximately 14,000 or about 70% of our genes trace their ancestry back to the original deuterostomes. By comparing the genomes of the acorn worm to other animals the group of researchers found the presence of these genes in the common ancestor of all the deuterostomes, which is a now extinct animal that live half a billion years ago. The study showed that the pharyngeal gene cluster, which forms the slit in the acorn worm, is a characteristic unique to the deuterostome family and could be linked to the development of the pharynx in the humans, which is the regions that links the mouth and nose to the esophagus.

The gene cluster was found to only exist in deuterostomes and is not found in non-deuterostomes. The gene cluster contains six genes ordered in a common pattern, that includes the genes for four proteins that are crucial transcription regulators that control the activation of numerous other genes. The DNA that codes for these genes, as well as some of the DNA pieces that are used as binding site for the transcriptions factors is shared and conserved among all deuterostomes.

I find this article extremely interesting because it shows how genetics and our genes can be used in the concept of evolution. The fact that we can trace our genes back billions of years and find common ancestors of modern day animals that are so different is extraordinary. It really shows the power of genetics and shows how our genetics can be so similar yet small changes can drastically change our development.

For a link to the original article click here
For more information about this discovery click here
To learn more about the acorn worm click here
Posted by Unknown at 12:49 AM