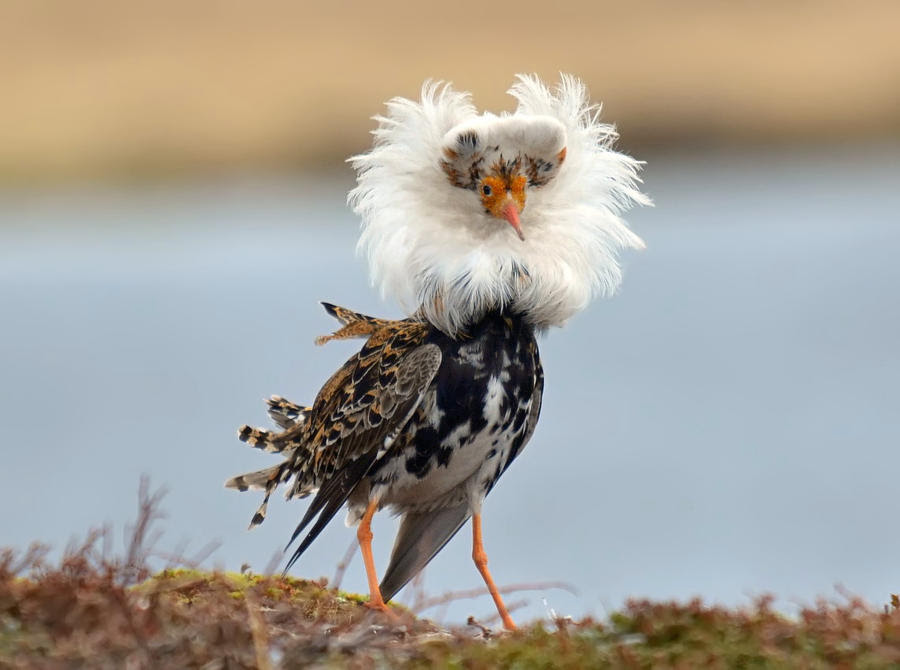 The interesting thing about this wading bird species is the physical appearance of certain males can identify the mating tactic they use to attract females. Male ruffs fit into one of three mating categories. Independent males, which include neck feathers that are a mix of black and brown in color, "are territorial and defend their bit of the breeding ground," to corral nearby females.  (Calloway, "Supergene" Determines Sex Strategy, 2015) Satellite males have white neck feathers and invade Independent Male's territory in order to steal females. The most rare and least decorated type of male is the faeder which uses its resemblance to female ruffs to trick and get in between a territorial male and possible female mate. Faeders create somewhat of a ruff sandwich where the faeder males "jump on the female before the territorial males does" which tricks the territorial male into jumping on top of the faeder. (Calloway, 2015)
What creates these three different behaviors is this supergene with "4.5 million DNA letters" made up of 125 individual genes according to Teddy Burke, an evolutionary biologist at University of Sheffield, and Leif Anderson, and evolutionary geneticist at Uppsala University. (Calloway, 2015) This supergene was created when "a long stretch of DNA inverted itself some 3.8 million years ago" which prevented genes within it from recombining with corresponding genes on a sister chromosome, and so cemented around 125 adjacent genes together." (Calloway, 2015) This is version of the gene faeders posses. Then some parts of this gene flipped back to correct places leading to a second version of this. This is the version satellite males posses. Independent males, however are missing either version of this gene and instead do not have any mutations near the gene that breaks down testosterone as the other two types do. This could explain their reason for being territorial.
This especially interesting to me as I did not know of the Ruff species before reading this article. It was interesting not only learn of this bird species, but also to learn of their strange mating patterns. The information of the ruff's mating patterns interests me into researching similar organisms that also have different male mating patterns and comparing if they are also determined by a supergene.
Posted by Kcarramusa at 3:30 PM