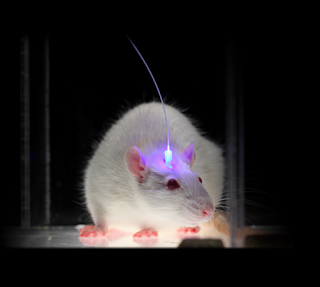 Imagine a flexible, implant in the body that stops pain at its source so that it can never be perceived by the brain. And it doesn't require batteries. Researchers from Washington University of Medicine in St. Louis, MO, and the University of Illinois have recently developed a prototype, undergoing trials in lab mice, of the implant.
The research team is utilizing the newly developing field of optogenetics, "a biological technique which involves the use of light to control cells in living tissues, typically neurons". The genetically engineered lab mice being used have nerve cells with light-sensitive proteins on their surfaces. These new devices can be held in place with sutures, and the research team hopes that eventually the technology can be used to "treat pain in very specific locations by providing a kind of 'switch' to turn off the pain signals long before they reach the brain". In their study, the research teams used the device to activate small doses of pain in lab mice to demonstrate the ability of light to induce or block pain in different methods. They believe that their studies demonstrate that optogenetics has future potential in areas of the body other than the brain, such as the bladder, stomach, and joints.
I personally believe that advancing branches of medical fields such as optogenetics will lead to improved healthcare in the future. Technology is rapidly advancing, and implanting a "pain-stopping" device is both exciting and expected sometime in the near future. Beginning research now on these new, prototypical fields will be beneficial in the future.
Posted by Bethany Mancuso at 7:57 PM