Increased Risk of Renal Cell Carcinoma Due to Meat Consumption 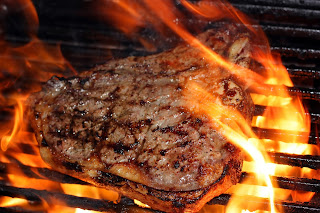 Having a high meat intake diet may lead to renal cell carcinoma through the intake of carcinogenic compounds which are created by certain cooking techniques such as barbecuing and pan-frying. In addition, a study by The University of Texas MD Anderson Cancer Center has discovered that individuals with specific genetic mutations are more at risk to the harmful compounds created when cooking at high temperatures.

Renal cell carcinoma is the most common form of kidney cancer and is expected to be diagnosed in over 60,000 patients this year which is estimated to result in 14,000 deaths. This new research shows that the increase in RCC over the past several decades may be in correlation with the typical diet of those living in Western civilization. The research suggests that meat that has been cooked in high temperature fashions form the carcinogens 2-amino-1-methyl-6-phenyl-imidazo(4,5-b) pyridine (PhIP) and amino-3,8-dimethylimidazo(4,5-f) quinoxaline (MeIQx). The kidneys are biochemically active organs which are responsible for filtering many harmful toxins from the body, therefore leaving them sustainable for the harm caused by these carcinogens.Although in the past only red meat has been considered potentially harmful to the body, white meat cooked at high temperatures poses the same risk. Results show a 54% increased risk of RCC associated with PhIP intake and nearly two fold increase associated with MelQx intake.

Individuals with variations in the gene ITPR2 were more vulnerable to the effects of consuming PhIP. This gene has been previously associated with kidney cancer and obesity risk. Research to better understand the mechanism at play is underway. Researches do not recommend completely removing meat from your diet, but do suggest using different cooking methods to limit your risk.