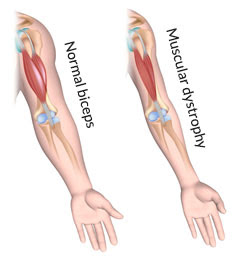 Researchers have been studying Muscular Dystrophy and have made a major breakthrough that may lead to a treatment for Duchenne musculardystrophy. Muscular Dystrophy is a disease that affects about 250,000 Americans. It causes people to loose function of their muscles. Duchenne is the most common form of muscular dystrophy, and is found in boys. The disease is caused by a genetic mutation that disrupts on of the largest genes in the body. The gene produces a protein called dystrophin. Duchenne’s disease causes people to lose the ability to walk and breath, as they get older. The life expectancy for someone with Duchenne’s is early 30’s.

The lab at University of Missouri School of Medicine conducted this research. Professor Dongsheng Duan is a professor of medical research at the school and spoke about the research. Unfortunately, due to the large size of the gene that needs to be altered, a transport vector that works for other genes would not work. The team developed a microgene and was used to administer the therapeutic gene successfully in mice. Since then, dogs that showed signs of Duchenne’s at the ages of 2 to 3 months were administered the microgene by a harmless virus and gave promising results. By the age of 6 to 7 months, the dogs were developing normally.

This research is very exciting to me. I volunteered at a camp this past summer for children with muscular dystrophy, and I have seen the affects of this disease first-handed. I was not only exposed to Duchenne’s but many other forms of muscular dystrophy as well. Though these children were not physically strong, they were some of the strongest individuals I have ever met. I do not believe that the research is developed enough to become a human trial, but I look forward to reading more about the research being done to cure this disease.

Click Here to read the article!
Posted by Unknown at 8:55 PM