A study presented during Obesity Week by researchers at the Imperial College London suggest they have found a pair of genetic variants that seem to correlate with obesity, as a result of increased reward responses in the brain to foods high in sugar and fat.  These two variants are located in the FTO gene and the DRD2 gene which are associated with risk of obesity.

The study found that activity in the striatum is increased in individuals with the FTO variant when looking at high calorie foods, this is only seen in those with a certain DRD2 variant, meaning that DRD2 variants have an effect on the dopamine system.

As a result of their findings the researchers suggest that individuals with FTO variants as well as DRD2 variants are more likely to be obese as a consequence to their altered dopamine signals, which cause them to have increased cravings for high calorie foods. 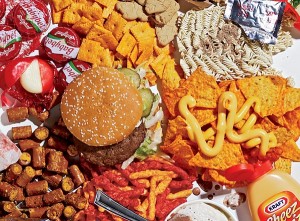 I find this to be quite interesting, because these results can possibly give some explanations as to why there are individuals who just struggle with being overweight, where the usual weight lose interventions don't exactly help.  Now that we know there could be some type of gene variation behind these behaviors, better more efficient "treatment" plans can be put into place, and maybe even some medications can be made/discovered to help these people who struggle with being overweight and constantly craving foods that are not good for them and causing their weight gain.