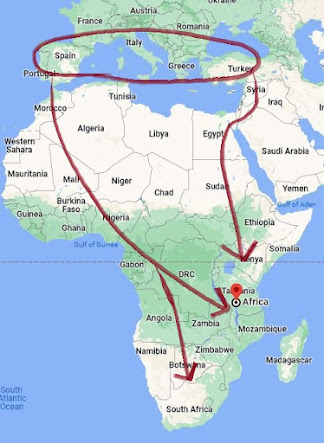 Africa is a difficult continent to obtain ancient DNA samples from due to its intense heat and moisture which acts as a catalyst for degradation. However, samples were obtained from the bone of three individuals living between about 5,000 and 18,000 years ago. One individual was excavated from the Tanzania region, while the remaining two were discovered north of Zimbabwe in the province of Malawi. All three samples expressed minimal wear due to the nature of their burial conditions in cool, isolated caves and rock shelters. Furthermore, Elizabeth Sawchuk- a bioarcheologist at the University of Alberta affirmed that ancient DNA specialists liaised with the archaeological team to prevent contamination and ensure preservation of said samples.

These ancient inherited sets of genomes were noticed to be increasingly similar between groups within Southern, Eastern, Northern Africa and those of Southern Europe, supporting ancient European migration into all stretches of Africa. These once thought to be unmixed genes show a significant amount of Eurasian ancestry. However, samples contained within the timeframe of the last ice age (20,000 years ago) pointed to the contrary, hypothesizing a preference of local mating rather than traversing dangerous arctic terrain.