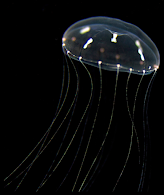 This article talks about how a group of researchers genetically modified Clytia hemisphaerica, a tiny jellyfish only about one centimeter when fully grown, using a genetic toolkit so that their neurons, when activated, individually glow with fluorescent light. And because the jellyfish is transparent, the researchers can watch the jellyfish's neuron activity. Unlike our brains, which is located in our head, the jellyfish's brain is spread out across their entire body almost like a net. Because of this, the jellyfish's different body parts can operate even when it is separated from the body. What the researchers wanted to find out is how decentralized nervous system can coordinate and operate behaviors. They tested their modified organism by looking at its feeding behavior.

When the Jellyfish eats a shrimp, it folds its body to bring the tentacle to its mouth while also bending its moth toward the tentacle at the same time. Examining the glowing neurons reveals that their is a surprising degree of organization. A subnetwork of neurons produces a particular neuropeptide is responsible for the inward folding of the body. The researchers hope to continue to use the genetically modified jellyfish to better understand how behavior is generated by whole neural systems. The researchers also noted that jellyfish are so distantly related to humans such as other model organisms like the mouse. In fact, worms are evolutionarily closer to humans than jellyfish. But the researchers say that because of their distance relationship with us is why they are important to study. They can be used to help us better understand the principles of neuroscience in nervous systems across all species and to discover useful biological innovations. Also, understanding these jellyfish nervous systems can be used as a springboard to understand more complex systems.