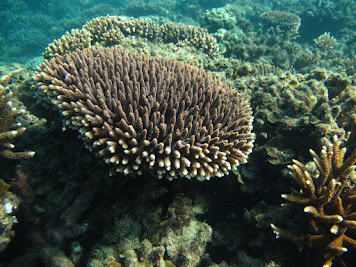 Anthropogenic climate change is creating warmer temperatures in the oceans and for certain coral reefs when temperatures remain above a sustainable level for extended periods of time, coral bleaching occurs. This study used genomic-wide patterns of variation to predict bleaching responses across a distribution for coral conservation. Coral reefs consist of a symbiotic relationship between the coral itself and intracellular photosynthetic dinoflagellates that provide energy for the coral. During coral bleaching the coral becomes intolerant to the heat and the dinoflagellates of the Symbiodiaceae family are expelled from the coral and if the coral does not take these dinoflagellates back in after an extended period of time the coral dies. This study looked at Acropora millepora, a common reef-building coral, that is widely distributed across the Indo-Pacific Ocean that potentially can have significant genetic diversity between populations that are better adapted to warming sea temperatures. There were 237 samples of chromosomal data taken from 12 different reefs in the central Great Barrier Reef. Heat tolerance in coral is not fully understood if it is polygenic or influenced by some common large-effect loci. The only loci found in this genomic-wide association was a long-term balancing selection in heat-shock and it is called sacsin. Sacsin is a co-chaperone for the heat tolerance protein Hsp70 and this helps the coral adjust to warmer temperatures over a long period of time; however, recently due to anthropogenic impacts the changes in temperature have been fast and short-term periods. This locus is found in the genus of corals Acropora and Pocillipora and the sequence of sacsin has been maintained with little to no variation across millions of generations, so any variation detected in this gene will suggest adaptation for the balancing selection for increasing heat. There was little haplotype diversity across the chromosomal scale for genomic-wide association due to the broadcast spawning mode of reproduction in A. millepora. This indicates that coral bleaching responses are not due a common locus across a genome, which supports that the phenotype of coral bleaching is polygenic and individual coral populations responses to warmer temperatures can be predicted instead of across a whole genome.