More than 30 Ancient Viruses Discovered from Glaciers in Western China 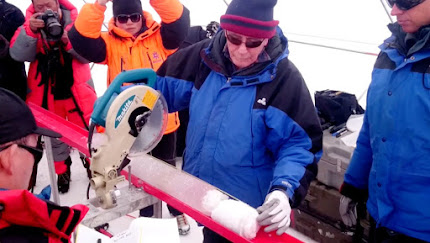 Scientists discovered a variety of ancient viruses, frozen for at least 14,400 years, in two ice samples taken from the Tibetan Plateau in China. The glaciers of western China are not well-studied, and most of the viruses are unlike anything scientists have ever seen before. Genetic codes for 33 viruses were discovered by researchers as the ice was analyzed. Four genetic codes of the viruses showed they are part of virus families that commonly infect bacteria. However, 28 of the genetic codes have never before been identified by scientists. It is believed that the viruses originated from plants or soil rather than animals, and the ice's extremely low temperature has preserved the codes. The viruses were found to have signatures of genes that assist them to infect cells in extremely cold environments.

A method by lead researcher Zhi-Ping Zhong, developed to decontaminate the ice cores and to study microbes and viruses in the extreme cold, could assist scientists in searching for these special genetic sequences in other extreme icy environments.  This could lead to more discoveries on other planets such as Mars, or the moon, as well as other environments on Earth such as the Atacama Desert. Also, as scientists understand very little about microbes and viruses in these particular extreme environments, and what is actually there, this new discovery will aid researchers in collecting data and learning more about how viruses respond to climate change. This could be important as the glaciers start to melt due to global temperatures rising. The documentation of how these viruses will survive will be crucial knowledge to Earth's future.