Is Your Athletic Success Determined by Your Genes? 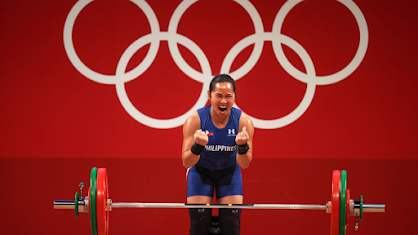 If you want to win a gold medal at the olympics this summer, you don't only need determination and perseverance, you need the key genetic factors influencing the musculature structure needed for your event. Everyone has either one (or a mix) of the three types of muscle fibers: slow twitch, fast twitch 1, or fast twitch 2. Those with slow twitch fibers will perform well in events such as the triathlon, where athletes will be engaging in activity for almost two hours. Whereas those with fast twitch fibers will perform best with events such as weightlifting, where the event is all about short term power. Genetics have a key role in determining those muscle fiber types, as well as other necessary athletic components such as flexibility and muscle mass. Scientists have focused on studying two genes: ACTN3 and ACE. The ACTN3 gene has influence on the production of the protein alpha-actinin-3 found in fast twitch muscle fibers. There is a variant called R57XX where an individual will have shortened alpha-actinin-3 that is broken down quickly. If an individual has a variant in both copies of the gene, they have 577XX where there is an absence of alpha-actinin-3 and those athletes will have much more slow twitch fibers. On the other hand, the ACE gene is related to blood pressure and controlling the production of the protein angiotensin-converting enzyme. If an athlete has a higher level of the DD variant they will end up with more fast twitch fibers. Aside from specific genes, an individual may be more athletic due to their environment. Simply put, an individual who comes from athletic parents will most likely have athletic traits. Could you win a medal just based on your genes? Personally, I think that goal could be achieved!
https://medlineplus.gov/genetics/understanding/traits/athleticperformance/
https://www.ncbi.nlm.nih.gov/pmc/articles/PMC3993978/
Posted by Julia Kline at 9:21 AM