Most of Human DNA Is Not Actually "Human" 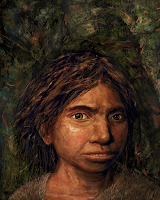 A study conducted by researchers at the University of Santa revealed that most "human" DNA is not human. The research team discovered that the percentage of distinctive human DNA ranged from only 1.5 to 7 percent of the entire human genome. The researchers are currently unsure what the distinct human DNA does yet, but the genes scattered throughout the genome typically had genes connected to brain development and function. This suggests that the evolution of the brain was critical in shaping modern humanity. Much of the DNA contained in the human genome appears to have come from ancient human ancestors, such as Neandertals, Denisovans, hybrids of ancient humans, and unknown human ancestors. The researchers emphasized that their results did not mean individuals are mostly Denosivan or Neandertal, but rather that individuals may contain Neandertal or Denisovan DNA in their genome. From the data collected, about half of the overall genome has regions where one or multiple individuals inherited DNA from Neandertals or Denoviosons. This makes sense considering humans and Neandertals and humans separated evolutionary-wise about 600,000 years ago. This is when the "evolutionary bursts" occurred when distinctly human DNA arose in the human genome. The second burst occurred only 200,000 years ago. This study demonstrates how greatly the human genome was affected by other hominid species. By understanding more about how human ancestors impact the genome, we can better understand our DNA.

Posted by Danielle Harzold at 10:33 AM