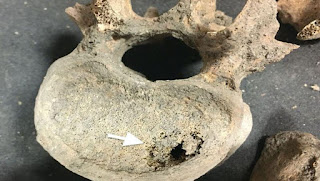 Usually cancer is thought of to be a modern problem caused by cigarettes, fake sugar and modern appliances. We tend to believe that cancer wasn't a problem for people until modern medicine came of age. But our beliefs tend to mislead us, cancer has affected the human race since the dawn of man, the earliest records of malignant tumors date back to 3000 BC.

Recently University of Cambridge researchers used xray and CT scans to look for cancer in medieval skeletal remains. This allowed them to find cancers that did not spread to the bone. They discovered that 9-14% of the skeletal remains had evidence of some form of cancer, which is 10x greater than previous projections. These numbers are still far less than the cancer statistics today which are 40-50% of people have cancer at some point in their life, but people are also on average living 50 more years than they were before, so all things considered the rate of cancer isn't too far off from what it was. I think this discovery of how common medieval cancer rate is, we could try to find definitive causes of cancers and not just blame modern society.

Because the article doesn't take life expectancy into account I did some not great math: