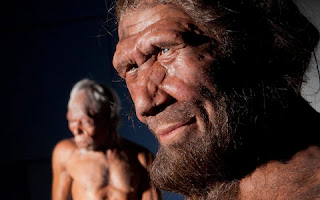 In an article posted by sciencenews.org titled "Neandertal DNA from cave mud shows two waves of migration across Eurasia", it is revealed that an early wave of neanderthals that existed approximately 135,000 YA may have been replaced by genetically/structurally different successor populations about 30,000 years later. These findings suggest that the Eurasian dispersion of neanderthals was split into two groups, to which belonged two distinct populations/waves of migration. One branch of the earlier population is established to have been the progenitor of all later groups to be examined by researchers, including the "classic" Homo Neanderthalis, which is typically associated with the later waves of migration.

The findings were uncovered via novel techniques which involve extracting DNA and genetic material from sediments and dirt. The DNA is typically extracted via skin flakes, dried excrement/bodily fluids, hair, and other left over material from our prehistoric ancestors. Most prior DNA taken from sediment was derived from mitochondria, however, in recent years, researchers have been able to extract far rarer (and more fruitful) chromosomal DNA via the identifications of loci which possess mutations that are exclusive to hominids, thereby filtering out all non-human DNA. This technique was pivotal in aiding researchers in successfully analyzing 150 samples of Neanderthal chromosomal DNA from caves in Spain and Siberia, thus revealing the primary finding of two major waves of Eurasian migration. It is noted that the later population/wave of Eurasian migration may possess the physiological features of the classic neanderthal, such as enlarged regions of the brain pertaining to visuospatial ability, hypertrophied neck muscles, and many physical attributes related to the last ice age, of which these ancient hominids would have lived during.

Posted by Steve Neustadter-Schneider at 1:40 AM