Change Occurring in the Cytoplasm 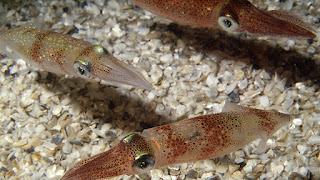 The article Squid Edit Their Genetic Material in a Uniquely Weird Place details an important discovery of an ability that a certain individual can do unlike most known animals. The Longfin inshore squid or the Doryteuthis pealeii is the only known animal to be able to edit their mRNA or messenger RNA outside of the nerve cell nucleus. Generally most animals are able to make edits to their RNA but do so rarely and when they do they are done within the nucleus and then exported out. The unique ability that the Longfin inshore squid has is that it can do its RNA edits in the cytoplasm.

The method in which the squid edits their RNA is similar to how CRISPR is used to make edits in DNA. CRISPR has allowed for DNA sequences to be modified to correct genetic defects that are threatening and even aid in the genetic modification of crops. But unlike editing DNA which happens to be a bit tricky because errors are permanent, editing the RNA isn't as dangerous and unlikely to repeat because RNA is broken down. Studies show that it is possible that squid is able to edit their RNA in both the nerve cells (neurons) that send signals to the brain and throughout the body and in the cytoplasm at the same time.With this new discovery it's important to consider this as a possible to track to discovering how to develop therapies that would be useful to treat chronic conditions. While more research is needed it would benefit the medical community to find other alternatives to treat chronic conditions besides just prescribing medications.

Posted by Ashley Villavicencuo at 9:00 PM