Penicillin allergies may be linked to one immune system gene 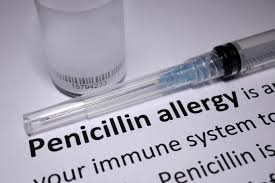 Jeanne Erdmann writes in her article that people who have reported getting an allergic reaction to the drug Penicillin may have a vulnerability on the HLA-B gene. Penicillin is a antibiotic that is used against many different bacterial infections but 10 percent of people have reported to be allergic to it. Penicillin is not the only drug that makes the HLA-B gene to produce a bad reaction in the bodies of humans. Studies have shown an HLA-B variant to have adverse reactions to an HIV/AIDS medication called abacavir.

600,000 electronic health records from people who reported allergic reactions were used in the penicillin study. Researchers need this information so they could go through the DNA in search of genetic variations that cause the bad reactions. Fortunately they found it on chromosome 6 on a variant called HLA-B*55:01. Then they used a genetic-testing company called 23anMe to go through 1.12 million people who had a European ancestry in order to see if they could find the same link/variant which they did. They also did this with East Asian, Middle Eastern, and African ancestries and found nothing. Of course this is very new study and its seems to be a few holes that researchers need to fix. Nonetheless I think this is a very important because we can maybe find a way to make penicillin work for people who have minor allergies to the drug. Some alternatives don't work as well as Penicillin making it harder for the patient so if they could alter the drug so the patient won't have a reaction would have an impact on the healthcare world.

The image used was from this link.

Posted by Karlin Jimenez at 8:07 PM