Men vs Women and Corona Virus 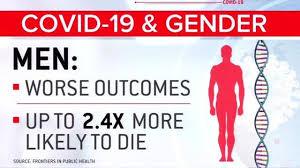 Do you ever think about how well our bodies fight off viruses? This article I came across discusses the difference between the female and male immune response to corona virus and other infections that are said to be multifactorial. The familiar thing that determines immune response includes X and Y chromosomes. They are interconnected and influence one another in developing the organism's immunity. We often noticed that the elderly are the most common to get severely affected by the virus, although a more striking fact learned is that gender also plays a role as well as age. As many professionals work to study the detrimental virus, and analyze the behavior, they work to develop treatments for the disease and public health studies have shown a male-biased increase in severity and death rates compared to women. According to the article, a study of over 70,000 COVID-19 patients in Italy results show a wide range of instability in the fatality rate. Increasing alongside age, the average rates ranged from 0.16 to 20.88% for women who were affected, and for men 0.27 to 34.68%. Men were said to have an overall risk ratio of 1.74 when in comparison to women.

Posted by Alexa Mastroddi at 1:45 PM