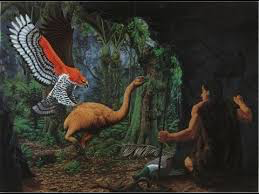 New Zealand is regarded as one of the most beautiful countries, with astounding land and seascapes. Today, many incredible animals live there and thrive off the land. However, just a few hundred years ago no terrestrial animals existed on the islands. The island had only avian creatures which comprised of the island's whole ecosystem. In a recent genetic discovery, a bird of legend has been brought to life and is now considered to be atop the ancient food chain of New Zealand. 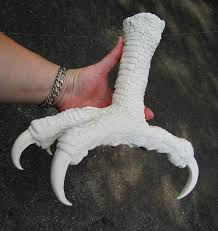 The Haast's eagle was massive in every sense of the word, and can be described as something from fairy tale. The bird of prey weighed up to 40 lbs. and had a wingspan of up to 9 feet. They are by far the largest eagle to ever exist. These numbers are impressive but what is more astounding is that the eagle flew at 50 mp/h, and it's main food source? Moa. A native flightless bird of Polynesia, which weighed up to 500 lbs! 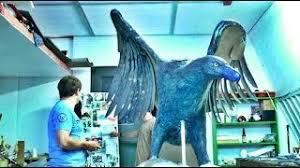 In 1872, the remains of a Haast's eagle were uncovered, and theories of their evolution, history and ecology started to formulate. More recently, in 2005, biologist were able to extract DNA from the fossilized remains and analyze the data collected to understand the extinct species better. When comparing the DNA of the extinct eagle to 16 extant species, the researched were able to uncover many of mysterious qualities of the birds that could not be answered before. Using PCR amplification on mitochondrial genes, the researchers came to a surprising conclusion. The Haast Eagle turns out to be more closely related to very small eagle species, like Hieraaetus, a species that weighs in around 2 lbs, than it does to a larger species like A. audax, which is large species. After further analyzing the mitochondrial DNA of the bird, scientists were able to place it on a phylogenic tree.
Since the bird is so closely related to smaller birds of today, how did it grow so large? Lack of competition fueled the bird into a massive 50 mp/h flying death machine. Having no terrestrial competitors, this avian species took advantage of the birds on the island that could not fly, particularly the Moa population. This caused the bird to grow larger, and larger with every generation. Around 1350-1400 when humans arrived in New Zealand, the extinction of the Haast's eagle starts, as humans are now the biggest competition to secure food. When the Moa became one of the favorite meals of the early New Zealand settlers, the decrease in population of Haast's eagle began rapidly, as there was no prey that could provide enough energy for the species to survive. And thus, the legend of the Haast's eagle was born, from stories and cave painting of the indigenous people of New Zealand.
This article was extremely interesting because it really made something come to life, that was previously just thought of as a legend or folklore. In uncovering the fossil of the Haast's eagle, it really makes you think how science and biology can honestly sound like one giant fairytale sometimes, but no! This is the world we live in. How cool is that. Being that I find ecology so interesting, I liked how the article connected cell biology down to the mitochondrial level and connected it with a large ecosystem.