Scientists have created an artificial form of E. coli based on entirely synthetic DNA.

Scientists in the UK have created an artificial life form called "Syn61", a form of bacteria that has a completely redesigned 4 million letter genome. This feat can help pave the way for designer bacteria capable of manufacturing new proteins, drugs, and other materials. The DNA was ordered in short sequences, then assembled into longer sequences in yeast cells via cellular machinery. These yeast cells produced segments of DNA measuring 500,000 letters long. After each of these segments were tested in partially synthetic bacteria, the 8 segments were combined to create Syn61.

Jason Chin, the head of this project also took the liberty to correct errors in the synthesis of this bacteria, only 4 total letters. In addition to this, Dr. Chin along with colleague Julius Fredens, decided to remove some codon duplications in the bacteria genome. There are 64 possible codons that can be arranged from A G C and T, however they only code for 20 amino acids, meaning multiple codons can code for the same amino acid. Chin and his team believe that reducing the number of codons can increase the bacterias efficiency. Syn61 gets its name from the fact that only 61 of the 64 possible codons are used by the cell. The three left over codons can now be "reassigned" to non-naturally occurring amino acids, which could bring a different chemistry to the cell. The number of codons needed was also reduced to improve efficiency. One way of achieving this was to use less "stop codons" (UAA, UGA, UAG) which can also potentially increase the efficiency of Syn61. These efficiency improvement techniques will be quite useful once bacteria can be synthesized for the sole purpose of creating drugs and other useful biochemical materials. The team also took further measures to remove material in the cell that was no longer needed, such as tRNA of the deleted codons.

Syn61 has shown to grow roughly 60% slower than E. coli, which could suggest that the removed duplicate codons may actually have some importance. Nonetheless Syn61 is alive and reproducing despite having every gene on its singular chromosome altered. Another interesting finding is that the altered genetic code provides resistance to a wide variety of viruses simply because Syn61 lacks the tools to translate or integrate viral DNA, which could pave the way in creating virus resistant industrial microbes, plants/crops, and even human cells. Dr. Chin says they have not yet attempted to modify the virus in this capacity to be virus specific, but it is "high on his to-do list."

I found this article interesting because the creation of this microbe is a big step forward in synthetic biology. As more becomes known about this procedure we may be able to give ourselves immunity to certain viruses by receiving DNA specific to anti-viral materials. I also had not thought about the idea of "bacteria farming", in creating bacteria to produce a useful material. 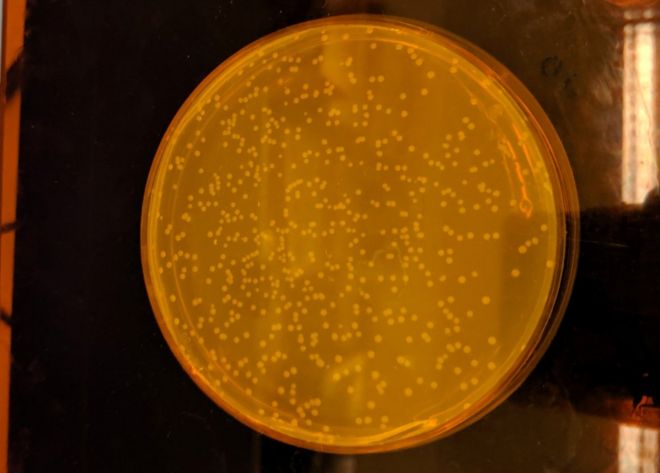