It is a common known fact that everywhere you go, you leave at least a trace amount of your own DNA. However, recent studies completed by forensic scientists are finding that something as simple as a handshake can actually spread DNA to places regardless of whether or not one has been there. The experiment found that after a ten-second handshake (which “is still two to five times longer than a typical handshake [Saey 3]), the other person’s DNA was found in objects touched immediately after, one in every fourteen times. The same concept was tested in a mimic-restaurant style setting and it was found that despite whether or not someone at the table touched another’s cup, the fact that their DNA was on the handle of the shared pitcher then effectively transferred their DNA and every person’s DNA was found on every person’s cup. This is a huge finding in forensic science and allows scientists to better understand how the transfer of DNA can majorly effect evidence in crime investigations.
A real-world example of the findings from this experiment was displayed in a 2012 robbery crime. This is fascinating to me but also somewhat troubling as there has been a real example of how someone’s DNA can turn up in places they have never been. Since DNA in crime investigations is still a relatively new idea, considering it became accepted in the 1990’s, it is extremely interesting to see the understandings of it still being unraveled and figured out in ways that will maximize efficiency and minimize mistakes. 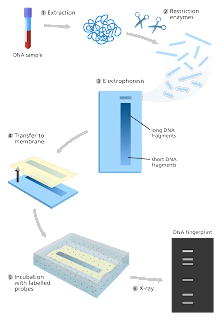 Posted by Brianna Comforte at 10:04 AM