In genetic engineering, the rise of CRISPR technology has led to numerous breakthroughs in editing DNA sequences. With CRISPR sequences, they are able to cut out fragments of DNA with the help of the Cas9 enzyme. The gene editing capabilities mean this tool can be useful for a variety of problems, including genetic disorders. However, Jennifer Doudna, one of CRISPR's creators, one of CRISPR's creators, believes the biggest impact will be in the food industry.
Her reasoning is that the CRISPR method is faster and cheaper than current methods, including GMO's. The CRISPR tool allows one to be more precise when editing DNA, which saves time and money. Corporations like Monsanto are heavily funding the advancement of research in this technology, and Jennifer Doudna predicts we will see CRISPR modified produce in stores within five years. Many startups have arisen as well with the goal of producing meat using CRISPR. It could be created using the DNA from a cell, meaning no animals would be killed.
As far as regulations, there should not be many obstacles. The USDA decided that in any circumstance in which the DNA editing could have been done using traditional methods, no extra regulations are required.
I am a proponent of this technology for the reasons stated, as well as the environmental benefits of replacing livestock with synthetic meats. It could help to prevent deforestation as less farms will be needed. Fewer ecosystems would be destroyed and replaced with corn monoculture. 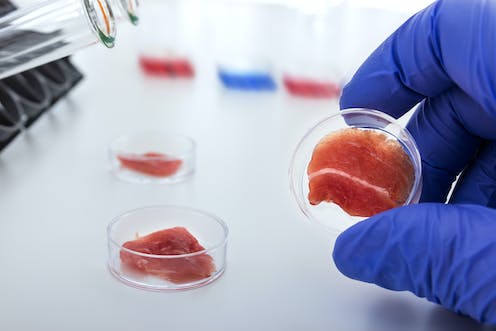 Posted by Trevor Sackman at 2:09 PM