According to the Food and Agriculture of the United Nations, the demand for food will approximately double by 2050 due to the growing world population. Therefore, scientists all over the world are developing new plant protein sources for human nutrition. A food chemist Thomas Hofmann studied the benefits of rapeseed, in which he found that it contains high-quality proteins and many essential amino acids.  However, humans are unable to consume rapeseed due to its bitter taste. Hofmann identified the compound called kaempferol 3-O-rhamnoside which makes protein extracts from rapeseed inedible. 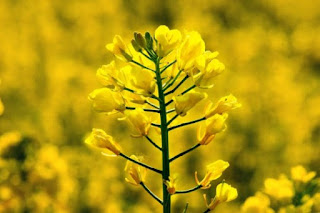 With identifying the compound which makes the high-protein containing rapeseed inedible, Hofmann is developing suitable technological processes or breeding strategies that can be used to produce better tasting foods from rapeseed. With the population constantly growing, I believe that developing ways to produce more food for future populations is highly important, especially when foods can be farmed and modified. Rapeseed is one of many plants that is currently studied for human nutrition.

Posted by Viktoryia Zhuro at 5:36 PM