According to Science Daily, an MIT-led research team developed a drug capsule, that can deliver oral insulin instead of injecting insulin to treat patients with type II diabetes. The capsule is said to be the size of a blueberry, which contains a small needle, made of compressed insulin, which is injected after the capsule reached the stomach. Tested on animals, researchers showed that the pill could deliver enough insulin to lower blood sugar as much as the injections given through skin. 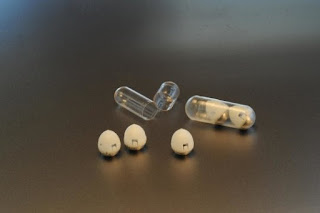 This is a very important topic, many people suffer from diabetes. However type II diabetes is often hereditary and non-preventable, and surviving with injections everyday is tough. With this new insulin pill, we can help many people battle type II diabetes and make it easier to manage. I hope that they will do further research and allow this "pill form" insulin to be promoted for pharmaceutical use.

Posted by Viktoryia Zhuro at 8:46 PM