Genetic clue's can now be used to predict whether early-stage cancer will form an invasive tumor. One type of non-invasive tumors, Carcinoma In Situ or (CIS), that occurs within the lungs can either remain noninvasive or progress into an invasive form known as Lung Squamous Cell Carcinoma (LUSC). Until recently scientists were unable to predict which CIS growths would persist. But now a a set of genomic alterations from a lung tissue sample can readily anticipate which tumors will become invasive. 129 lung tissue biopsy's were studied through a range of genomic anaylses including whole-genome DNA sequencing, analysis of RNA expression, and profiling of a DNA modification called methylation that can influence gene expression. Within the whole-genome sequencing 29 samples progressed to LUSC while 10 regressed to CIS. Almost all of the progressive samples had mutations in the tumor suppressor gene, TP53. The progressive samples also acquired a distinct pattern of chromosomal amplifications and deletions of sequences that are commonly found in squamous cell carcinomas. The regressive CIS generally lacked these chromosomal aberrations. A statistical method of analysis was further used to demonstrate that DNA methylation patterns in the regressive CIS samples were more similar to those of normal lungs in comparison to the patterns within a progressive tumor. While scientists were able to target the differences in mutations between CIS and LUSC, the reason for progression is still unknown. We can pin point which CIS growths will persist, yet we do not know which changes are essential for the invasive cancer to form. The evolution of CIS to form invasive carcinomas have also been studied in Breast cancer and continue to make remarkable advanced in early detection. I find this discovery very exciting and possesses a ton of potential to help treat patients before the non-invasive tumors become invasive and life-threatening. 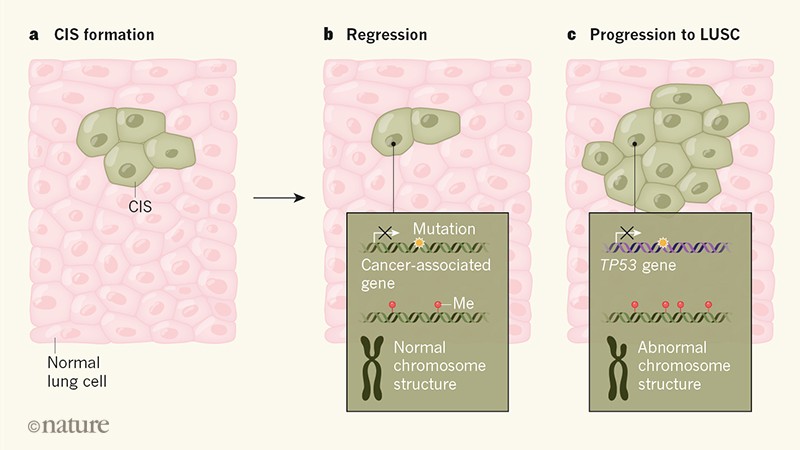 Posted by Meg Schaeffer at 2:39 PM