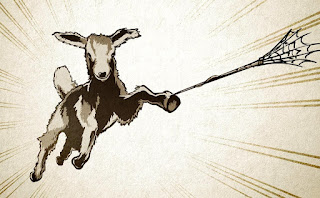 Hundreds of goats fill the pen as machine noises hum and buzz in the background. This new “transgenic” farm houses goats that are currently being injected with a single gene from spiders into their mammary glands, allowing the goats to produce spider silk within milk.  Mammary glands allow the synthesis of proteins to be made, allowing any type of foreign gene to be inserted and still allow the normal functions of the mammary gland to run along with receiving the desired proteins.  Since silk from spiders is one of the world’s strongest material, biotech companies are seeking ways to generate the silk in large quantities through the use of other animals rather than having a farm of spiders to do so.  This is due to spiders’ aggressive and carnivorous behaviors toward each other, so injecting the genes into calm, peaceful goats which can contribute higher quantities of the silk is the route taken.

In order to inject the gene, spiders are first frozen and then completely ground into powder since the gene containing the synthesis of silk is found within every gene of a spider.  After, the gene is altered in order to be “turned on” only when found within the mammary glands of female goats, despite it actually being present within every single gene of the goat.  Once the goat comes of age, silk will be able to be mixed within the milk and extracted.  The removed silk is then mixed with water and transformed into a concentrated syrup, which is then taken and inserted within a spinner which will constantly stretch the silk threads in hopes of making it as thin as it is found naturally by spiders.

As the silk continues to be spun, scientists believe that the proteins “lock into” each other through the tight bonds that are being formed.  The silk has such a long, complex chain of amino acids which makes it quite difficult to decode how silk is actually spun into threads by spiders.  However, scientists are coming to believe that the strength of the silk also comes from the way it is spun, which is why they are attempting to perfect the man-made spinning through their extrusion machines.


With this high production rate of silk within goat milk, the scientists will be able to extract the material and form it into useful products, such as biodegradable surgical stitching, replacing ligaments or tendons, or possibly create a bulletproof skin.  Nexia, a biotech firm which is currently undergoing these experiments and extractions, is attempting to find ways to produce enough silk to actually make these items.  If silk can actually be made into armor or replace body parts, I believe that many people that desperately need it will be saved.  Although the idea of having spider-goats is bizarre, the overall desire of producing enough silk through the goats’ milk will help millions.
Posted by mille299 at 2:12 PM