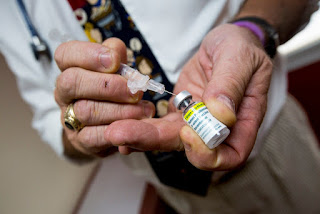 On Friday, October 5 the Food and Drug Administration finally approved the Gardasil 9 vaccine that works to prevent multiple cancers, such as, cervical cancer and diseases brought on by the Human Papilloma Virus. Gardasil 9 works hard to prevent against the nine strains that can be acquired during sexual intercourse. From vulvar, vaginal, anal, and cervical cancer to genital warts the vaccination works hard to keep men and woman safe during sex.  Dr. Ramondetta noted that "tumors affecting part of the throat — called oropharyngeal cancers — caused by HPV are rising, particularly in men. The vaccine is believed to help prevent them." (The New York Times, Grady & Hoffman) I truly believe everyone from the time they start becoming sexual active should receive the Gardasil 9 shot to remain as safe as possible because once a you already have a strain of HPV, the shot is unable to work against the strain you have already been exposed to.  When given the opportunity, it is always better to stay on the safe side and not expose yourself to a deadly disease.
The younger you are the shots come in a series of two, while the older you get the shots come in a series of three that need to be given months apart.  The main side effects of the vaccine is swelling, pain, or a rash on the site of injection, and headaches.  Some uncommon side effects consist of episodes of syncope, or other seizure like activity.  I strongly believe that the Gardasil shots are the best thing for the sexually active and can save many lives from just a simple shot.

https://www.merckvaccines.com/Products/Gardasil9
Posted by Unknown at 2:38 PM