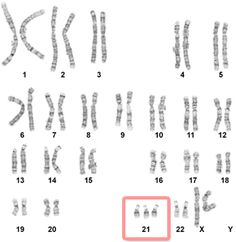 Iceland has become the first country to basically eradicate down syndrome from its population. It sounds nice, like a step towards a healthier population, but beneath the surface there is a darker aspect. We talked about this issue a bit in class, but I wanted to share this article I read recently. While the abortion rates of down syndrome babies are high in much of Europe, Iceland alone has the distinction of a 100% abortion rate. Only two of these children are born each year on average, the result of a false negative on the genetic testing.  It is important to remember that because this condition is caused by a random mutation, fetuses will continue to have it regardless of how many, or how few, are born. The high abortion rate may be due to pressure felt during genetic counseling, or the fact that although abortion is illegal after 16 weeks, an exception is made for “deformed” fetuses, which includes down syndrome.


It seems strange to me that Europe, with its generous healthcare, would have higher rates of abortion in these cases. When I try to put myself in the shoes of a woman who found out her fetus has this condition, my concern is over not being able to provide for its healthcare needs. European women don’t have this concern. I feel very conflicted this. Some have proposed making it illegal to abort a down syndrome fetus to counter this trend, but what about a woman who choses an abortion for other reasons, but would be prevented because her fetus has down syndrome? Perhaps they could follow the example of China when people were aborting girls due to the one child policy; just don’t allow that one test to be done.  Also, it might be helpful if societies had more support in place to care for these individuals. When giving birth results in either having a child you might not be able to care for properly or sending it away to a state institution where it can get medical care, but lives a life of suffering, I see why some might look for a way out. Maybe if the situation was made less hopeless, more women would step up to the challenge.
Source

A powerful video of a speech by activist Frank Stephens.
Posted by Unknown at 7:50 PM