Bones Show Dolly's Arthritis Was Normal For a Sheep Her Age 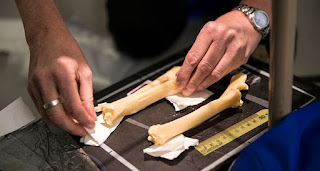 It was reported that Dolly the Sheep suffered from severe arthritis in her knees. New x-ray evidence shows that cloning was unlikely the reason for this arthritis. Other cloned sheep along with Dolly's naturally conceived daughter, Bonnie, were also x-rayed. Results revealed that Dolly had the joints of any normal sheep her age, cloned or not. Dolly had arthritis in her hips, knees, and elbows, which is common in sheep. Dolly, Bonnie, and two other cloned sheep, Megan and Morag, had their bones examined. After examination, it is suggested that Megan and Bonnie, who were older than Dolly at their time of death, had more damaged bones whereas Morag who was younger at death had less bone damage. Overall, Dolly's arthritis levels were equal to those of any normal sheep at her age, suggesting that cloning wasn't to blame. It is thought that her "creaky" joints are a result from giving birth to six lambs.

It is interesting to learn more about Dolly considering every biology student has heard about this famous sheep. I did not know the details of her health such as the arthritis but it is good to know that there is evidence supporting the cloning did not affect that aspect of her health and that it was just due to pregnancy which is common for sheep after giving birth.

Link to Original Article
Link to Related Article
Posted by Unknown at 9:05 PM