Mutation in genes of Obesity-Prone Dog breeds may help us understand human obesity. 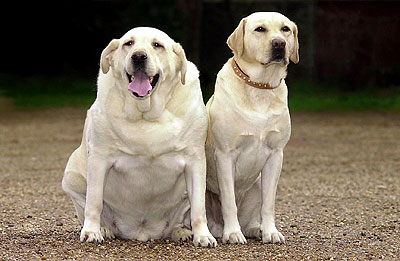 An article in New York Times magazine discusses a study done by scientists at the University of Cambridge on several dozen Labrador retrievers where they let the dog smell a sausage and then placed it inside of a hamster cage where it was inaccessible. They found that some of the dogs did not pay too much attention to the sausage while others were very concentrated on it, trying to get the sausage from the cage. In one of the dogs, that focused on the sausage, it was found that they had a mutation in their pro-opiomelanocortin (POMC), found in the hypothalamus, which controls metabolism. Eleanor Raffan, who was a part of this study previously did a study on DNA of more than 300 Labradors and found that 1/5 of the Labradors had the POMC mutation which is associated with appetite and obesity. Her study also looked at Labradors serving as guide dogs for the blind and found that 3/4 of them had the POMC mutation, which leads to the assumption that their predisposition to look for food makes them easier to train when being rewarded with treats.

Some obesity researchers believe that it could be very beneficial to look for POMC mutations in humans to help prevent obesity which increases the risk of health problems and diseases such as Type II diabetes. Because of this discovery, new drugs are beginning to appear to help people with severe mutations in their POMC causing obesity. One drug called setmelanotide helped a patient lose 112 pounds from 341 pounds after taking it for 42 weeks and after great results it is currently in clinical testing.


Article: The Genetics of Pooched-Out Pooches
Other Research: The coding sequence of POMC and obesity and appetite in Labrador retriever dogs
Posted by Unknown at 8:59 PM