Is There A Such Thing As The Autism Gene?

Scientists discovered twins that both have autism and have concluded that autism is highly heritable. Scientists are now trying to discover if there is a specific gene in our bodies that leads to causing autism. Some environmental factors that lead to autism are those such as exposure to a maternal immune response in the womb or complications during birth. Although their may be several conditions tied to autism, it is known to stem from mutations in a single gene. Therefore, scientists are leading to believe their is no exact autism gene. It is then suggested that Autism is therefore caused by combinations of genes acting together. An article on NY Times states that a lower risk ratio comes from sharing half of ones genes, as for fraternal twins or siblings. Growing up with a cousin who has autism, I have experienced first hand what it is like to help raise and guide them. It is truly an eyeopener, for the shear fact that I get to see her grow and make progress in everything she does. She picks up on things fast, knows every channel to my TV and loves to sing. 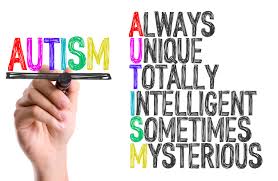