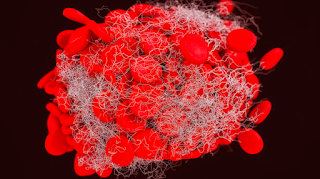 Hemophilia is an inherited disease that causes the patient's blood not to clot properly. Patients that suffer with hemophilia often find themselves bruising easily and experience excessive bleeding if injured. Scientists have recently discovered a way to treat/cure this disease using gene therapy. Ten men were injected with a virus that contained a gene for factor IX. The factor IX is a blood clotting protein that is often missing in people who have Hemophilia and that is why their blood does not clot properly. These virus injections were given to the ten men every few days. After a year and a half scientists began noticing that the men's bodies began making on their own about a 1/3 of the amount of factor IX that should be produced normally. Eight out of the 10 men no longer needed to keep getting the injections every few days because of efficient their bodies were at creating the protein.

This article was very interesting. Hemophilia is a very serious disease and victims of it have to live every single day worrying for their lives. Because of advancements in gene therapy and trial and error scientists have began making big advances in curing diseases. Now scientists can use what they learned from finding a way to manipulating factor IX production to cure other diseases.


http://www.sciencemag.org/news/2017/12/gene-therapy-stops-bleeding-episodes-hemophilia-trial
Posted by Unknown at 2:45 PM