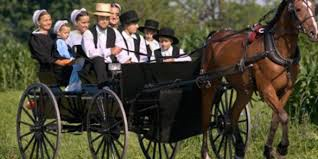 An article recently published on New Scientist, explains the study of a gene variant in the Amish that is actually making them live longer, while also defending them from diabetes. The gene is SERPINE1, which creates a protein responsible for ageing (PAI-1). The gene variant made its appearance six generations ago in an Amish community. The variant caused carriers to produce about half as much of the PAI-1 protein compared to those who were non-carriers.
Douglas Vaughan, of Northwestern University, and a group of researchers studied the SERPINE1 gene in over 170 members of the Old Order Amish community to see if this variant would promote longer life expectancy. Of the 177 members observed, over 40 carried one copy of the variant. DNA, ageing and insulin resistance were all studied throughout the experiment. They discovered that those carriers of the variant lived nearly 10 years longer than the non-carriers. They also found that the carriers had about 30% lower levels of insulin, which is a common sign of slower ageing. Vaughan said that "the carriers appeared to be completely protected from diabetes." Drugs have already began development to target the ageing protein, which is a great find for the medical field.
This is such an interesting article to me. It makes me wonder if this gene variant is present in others and not just the Amish community. Hopefully there will be future studies to see if this is true! This is a awesome and useful information that can really help determine life expectancy for future generations.
Posted by Unknown at 12:16 PM