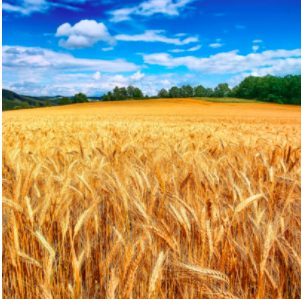 In the past, humans have grown plants and hand selected the traits that they wanted to keep producing. Although that has worked for producing crops that taste, look, and are the size that we would like the method doesn't work when environmental factors come into play. This year the U.S. has experienced it's lowest number of wheat harvested in the past 15 years. Why? The climate, along with pests and diseases are ruining the wheat grains. Scientists are looking at using CRISPR which allows for gene editing in order to create wheat grains that are stronger and can survive these environmental factors. Asia and Africa are also seeing this same issue but with their rice harvests. However, the food industry is nervous about how consumers are going to react to CRISPR being used on their food. After all, foods from GMO caused a lot of controversy. Whether or not CRISPR can be used to fix the issues we've been seeing in our crops is up to the science and societies acceptance.

The idea of using CRISPR is so new to us that I can see why scientists are hesitant to use the method on food. I think scientists should try to find other ways to naturally fix the harvest issues, and if they can't they should try the CRISPR method in a controlled setting and see how it works. I think that the public will eventually accept the CRISPR method for their food if they see the potential benefits it can have. However, the food industry hasn't always done whats best for the consumer so convincing the public will definitely be much harder now that they have lost their trust.

https://geneticliteracyproject.org/2017/11/21/crispr-breathing-new-life-crop-breeding-can-avoid-gmo-controversy/
Posted by Unknown at 8:10 PM