Study of S. Aureus on Mice 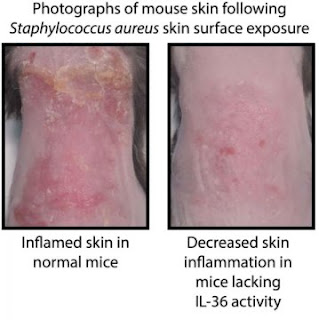 Staphylococcus aureus (S. aureus) is an important pathogen and is the most common source of skin infections in humans.  Eczema is an inflammatory skin disease affecting 20% of children and five percent of adults.  By not treating eczema it can lead to allergic reactions like food allergies, conjunctivitis, asthma and seasonal allergies.  Associate professor Lloyd Miller at John Hopkins Medicine, has stated that 20-30% in the U.S. have S. aureus on their skin or in their nose, and 80% of people will come into contact with it.  High numbers of S. aureus pathogen can be found on almost 90% of eczema patients.  Miller and his team are trying to find out how the condition arises and hopes for treatments to be formed.  A rare disease called generalize pustular psoriasis (skin erupting into tender red bumps with puss) caused by a genetic mutation resulting from unrestrained activity of protein produced in our skin called IL-36.  This research gave Lloyd and his team a clue that IL-36 has something to do with bacteria on the skin generating inflammation.
To put this idea to the test, a small soaked gauze with S. aureus was applied to the backs of a normal mice and mice genetically engineered to lack the receptor IL-36.  Miller and his team found that the normal mice developed skin inflammation and the mice genetically modified had little to no inflammation.
I find the research Miller and his team conducting to be very fascinating.  I know many people who have eczema and how much it affects them.  By doing this research on mice it can lead to many breakthroughs and treatments for eczema and S. aureus.