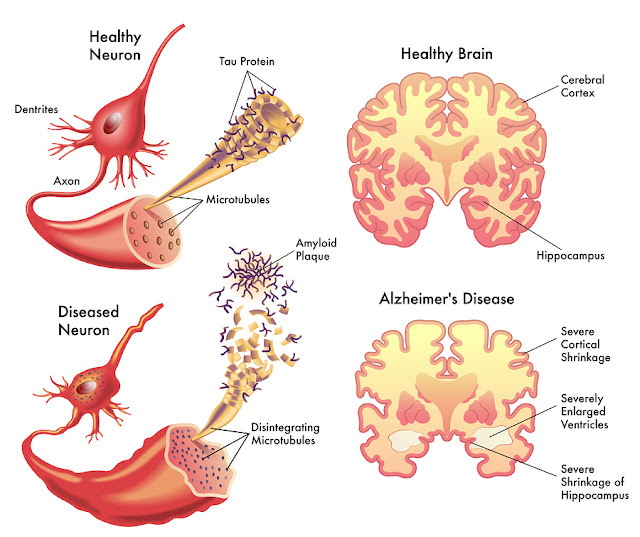 Until recently, the biggest contributor to the disease was thought to be the Amyloid protien. This protein is very present in those with the disease. The beta- amyloid had a sticky plaque which bind to and weigh down neurons, slowing them down. New research has indicated a possible new culprit for this disease. Deposits of the tau protein were found in a new imaging study of ten people with mild AD. It suggests, moreover, that the tau protein, instead of the amyloid, is closely linked to symptoms including memory loss and dementia. This finding could spur a number of new possible tau-protein-targeting treatments for the disease, along with better diagnostic abilities.
While it is true that amyloid is present much more in thos with AD, it is also true that in over 30% of people with no signs of dimentia has neurons full of the ß-amyloid plaques. New methods of marking tau- proteins in living brains have allowed the study to analyze 36 people without AD and 10 people with the symptoms. The results showed that those with more Tau protein deposits in their temporal lobe were more likely to show deficits in memory and attention tests. Alzheimer's is a very serious and scary disease. Very little is known about the disease and even less is known about how to cure it. This study illuminates a new possible path to curing this mind-crippling disease.

Underwood E. (2016 May 11) Tau protein- not amyloid- could be key driver of Alzheimer's symptoms. Science. Retrieved from http://www.sciencemag.org/news/2016/05/tau-protein-not-amyloid-may-be-key-driver-alzheimer-s-symptoms