Past Environment and Evolution Impacts On Mental Illness 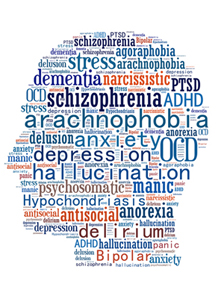 Mental illness have been the condition that still cannot be fully be cure in today society. It is due to hundreds and thousands of mutations in genes and DNA. Thus, it is very difficult for scientists to track how many genetics region evolved with the mutation. There are two research teams that trying to incorporate mental illness's genetic variation into environmental context. One of the team leaded by geneticist Barbara Strange was trying to find DNA variant thought through evolution of the past 2,000 years to protect against schizophrenia. However, there was no such signals. Another team leaded by human geneticist by Renato Polimati, he looked at 2,455 DNA across 23 sites across European and he founded that the areas with lower winter temperature were slightly genetically more prone to schizophrenia. He suggests that the genes help people to tolerate the cold must lay close to variants that promote schizophrenia. This article in different from the rest of researches regarding mental illness. In my opinion, this article do a great job summing up the two main research regarding the mental illness and the reader can understand about the research. It was fascinating in a way that environmental factor can have such impact on mental illness, rather than just genetic mutations alone.
http://www.nature.com.ezproxy.stockton.edu/polopoly_fs/1.22914!/menu/main/topColumns/topLeftColumn/pdf/nature.2017.22914.pdf
http://science.sciencemag.org.ezproxy.stockton.edu/content/354/6313/760
Posted by Trang Tran at 9:16 PM