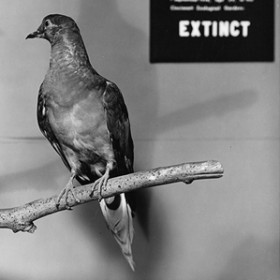 Passenger pigeons, have mostly stayed in larger flocks for their lifetime.  Their species amassed a large population throughout years, and then they randomly fell off the grid.  It is theorized that due to their massive population that could have played a factor in their extinction.  Many still wonder why the species did not survive even in small populations.  A team of scientist looked at the genetic diversity of the passenger pigeon.  The DNA was taken from the museum specimens, the results showed that the genetic diversity among the pigeons was very low.  This low diversity was due to natural selection killing off the bad mutations and only keep the good ones.  Throughout generations the parents would pass down more than the beneficial gene, sections of the DNA sequence would be the same from parent to child and to their offspring as well.

Taking a closer look at the passenger pigeons genes, it was shown that their surrounding environment and living in large flocks affected the genes.  It is typical for large species to have greater genetic diversity, but because they did not have much diversity this was a major proponent in their extinction.  Genetic diversity usually plays a major part in the immune system, and when these birds started dying off, many of them could not adapt because they were all too similar with one another.  This resulted in them going into smaller populations, which they could not sustain.