Exposure of Silent Genetics from Research in Corn 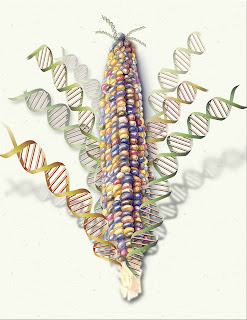 For years now, scientists have been researching the genes of corn to detect ways that genes are inherited.  In the article, "Corn Genetics Research Exposes Mechanism Behind Traits Becoming Silent" the researchers recently found a way to reveal the gene silencing in corn.  Gene silencing is the interruption or suppression of the expression of a gene at transcriptional or translational levels. The silencing of these traits can make it difficult for plant breeders to have faith in their results from one generation to the next.  Using the maize p1 gene in corn that scientists commonly use, the researchers found that there were two overlapping epigenetic components that were causing some traits to be silenced from one generation to the next!
I think that this article describes and important topic in genetics.  The understanding of how gene-silencing works to get some traits to disappear is essential.  Knowing that some farmers purchase seeds expecting a certain outcome and not getting that outcome, is something they should be prepared for and aware of