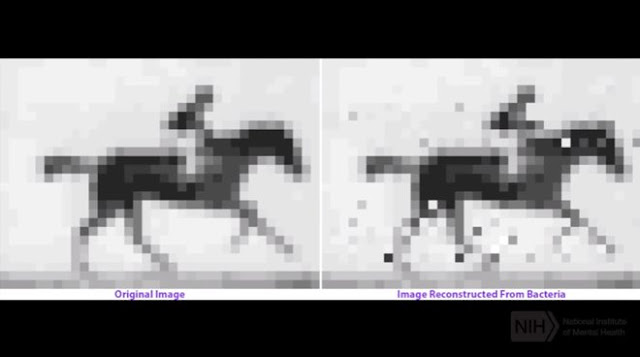 Scientists were successful in storing a video in the bacteria's DNA, yes you read that right. According to an article written on LiveScience, they were able to encode the data of a short video into the DNA molecules of bacteria...and guess what, they were able to play back the video after recovering the information from the genetic code! In order to get to their goal, scientists first started with a total of five frames from the classic 1870s movie of a racehorse. After that, those five frames were broken down into their pixels. Then, they created a code for every pixel and was inserted into the bacteria. They used short DNA fragments, containing these codes, for the insertion. Once inserted bacteria started incorporating that coded DNA naturally. It was mentioned in the article that the purpose of this experiment is not just storing videos in the DNA, but record the things that happen inside the cells. This means we could even watch what happens during the brain development! That would be such a cool thing to happen. I mean this is a major step toward the discovery of a "molecular recorder". This could change many things for the researchers and could help in the discovery of unimaginable things that happens inside our bodies.