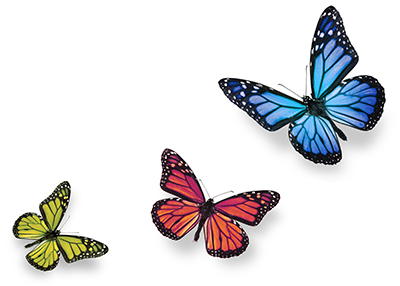 New genes are being discovered more frequently than ever. Scientists have found genes responsible for anything from your height to eye color. In regards to eye color, in humans, the genes associated with eye color can have mutations that cause different eye color (such as green eyes) or the absence of eye color (albinism). However, sometimes you want to change your eye color, perhaps you want to go bold and have purple eyes. So you get contacts. But what if there was a way to control what eye color you want? According to an article on The New York Times, scientists have located two "master genes" that are responsible for how butterflies get their wing color. One of these genes is called optix. It is the gene that is responsible for the pigmentation of butterfly wings. What scientists found was that if the gene was removed from the eggs of a certain type of butterfly, then there would be a different pigmentation in the wings of the butterflies. It was found that the melanin that was controlled by the optix gene created a different color, hinting to the idea that melanin is connected to the optix gene, and produced a different color. Scientists were also looking at gene called WntA, which is responsible for the patterns of the pigmentation to appear on the wings of butterflies. When this gene was deleted, then there was an absence of pigmentation in the patterns of the wings.

I personally find this study to be very fascinating. It makes me wonder if we would be able to do this with humans in the near future. However, I wonder if we would be able do this, would it be a cause for humans to have albinism, since the gene responsible for the melanin production in our eyes to become non-existent. I think it might become most likely become a very prominent phenotype if this would become successful, since the gene would have been removed entirely from original person. Overall, I find this study to be very interesting, and I wonder if similar procedures and experiments will be done in order to alter the appearance of humans and other animals.